Managing Many Calendars: Impersonation in Exchange

The sections below give links to relevant documentation

The Microsoft articles are rather concise. If you prefer something fuller the account below is a shortened version of a blog by Bruce Gruenbaum. The blog was written for an audience of programmers so I have just reproduced the parts about setting up Exchange. You can read the full blog at The Software Gorilla

What is Exchange Impersonation?

For the purpose of this article consider four users:

These three users are all teachers, in a fictitious school, so I have added them to the Staff user group.

So that we are using a common set of terms, I am going to call these the user accounts. There’s a subtlety here, though, that I need to make sure you understand: Freddie F Frogg has two accounts that we care about:

As I described earlier on, we’re going to create an account called Impersonator that will act on behalf of the three user accounts.

Just so you have a point of reference, I am running two versions of Exchange – Exchange 2010 and Exchange 2007 SP3.

In both cases, the Active Directory is running on a Windows 2008 R2 domain controller.

I am going to be using command line utilities to get things set up for Exchange Impersonation, and you may find that if you are doing things on a different combination of operating system and Exchange server, that things look or are slightly different. Consult the documentation for your combination and hopefully the differences are not too big.

There is really nothing special about adding the AD account for the Impersonator Account. It is simply a normal user in the domain.

Log on to the Active Directory server and simply add an account with whatever username you want to add. (In the image the name is “”EWSProxy””) 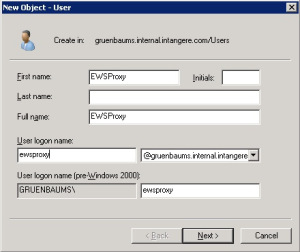 On the next page of the wizard, you are prompted for the password for this account. It’s important to make this a tough password and it’s also probably worthwhile setting the Password never expires flag, as this is intended to be a service account, and changing the password will affect the service as well. 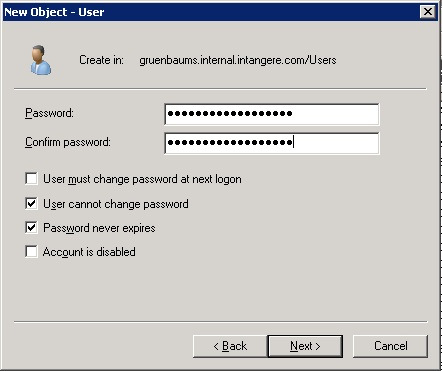 There is a marked improvement in the design of the 2010 release over the 2007 release.

Exchange Server 2007 makes use of Access Control Lists (ACL) to apply the permissions. You apply two rights; one that authorizes the Impersonator Account access to Exchange Impersonation rights on the Client Access Server (CAS), and the other that is applied to either an AD account or an entire Mailbox database. This is somewhat kludgey because you either do it on an account-by-account basis, or you do it on an entire mailbox database.

Exchange Server 2010 allows a much finer-grained control of the application of permissions because it makes use of Role-Based Access Control (RBAC) to apply the permissions. Instead of applying the tokens to an account or a mailbox database, you can define a scope to which the permission applies. This means that you can get all the users in a group, for example, and set the permission for that scope.

So let’s deal with applying these permissions to each of the server versions, one by one.

As I mentioned, Exchange 2007 requires that you apply two rights to be able to get Exchange Impersonation working:

ms-Exch-EPI-Impersonation – This right is applied to the Client Access Server and grants the Service Account permission to function as an Exchange Impersonation account on that CAS.

ms-Exch-EPI-May-Impersonate – This right is applied on either a user-by-user basis for each of the users that require impersonation to be enabled, or it can be applied on a mailbox database.

The first step is to make sure we have the right setting for the Client Access Server. I have reached the point with Exchange where I do most of my administration from the command line rather than the GUI. I find it much easier to do for a number of things, especially setting permissions. So I am going to give you the command line way to do this. You can do it from the GUI if you stand on your head while juggling balls, whistling the national anthem, and playing a guitar, but that is not my idea of fun. The command line is much easier. I guess that’s what comes of being a Unix geek.

With the release of Exchange Server 2007, Microsoft released the Exchange Management Shell (or Powershell) that allows you to perform most administration functions from the command line. To set the Impersonation permission on your Client Access Server, log on to your Exchange Server machine, and launch the Exchange Management Shell from the Microsoft Exchange Server 2007 program group in the Start menu. At the command line, type the following command (replacing intangereexs with your own CAS and EWS Proxy with the name of your own Service Account):

If the command succeeds, you should see a message similar to that at the bottom of the window below:

The next step is to set the permissions on each user for which we want to enable Exchange Impersonation. Again, from the command line, we will use the Add-ADPermission commandlet, except this time we are adding the right to the user, not the CAS server. Below are the 4 commands that I used to set these permissions.

Assuming you have set the permissions properly, your command window should look something like this:

That’s all that is required to set up Exchange Impersonation for these four accounts and the Client Access Server for Exchange 2007. As I mentioned, you can set the ms-Exch-EPI-May-Impersonate permission on a mailbox store basis, but I would not advise doing that unless you have segregated your users in a way that makes sense for you to do this. The last thing you want is to give a service account permission to read a CEO’s e-mail. That would be a serious CLM – Career Limiting Move.

I have used the term “group” here somewhat confusingly, and I’m going to perpetuate that confusion by using a security group as the basis for defining the permission, but that is not the only way to do this. The ApplicationImpersonation role has to be assigned to a ManagementScope.

So what is a ManagementScope? A ManagementScope is a logical group of users that are defined by a common set of criteria. It is not necessarily an Active Directory Security Group, although, for the purposes of our example, I will be using a security group to define it. You can define the scope to consist of users who meet a certain criteria, such as having a common manager.

You define a ManagementScope by using the New-ManagementScope commandlet. The RecipientRestrictionFilter parameter allows you to define the criteria that select a list of users. In this case, I am looking for all users that are members of the Sales security group (fully qualified: gruenbaums.internal.intangere.com/Users/Sales). The following command creates a management scope that will only include members of that group.

The string at the end of the command line is a Distinguished Name string from the Active Directory that represents the Sales security group. There are a number of different filters that can be applied to create a management scope. The nice thing about this one is that if I add or remove a user to the Sales security group, the scope defined here will ensure that the permissions for the user are affected accordingly.